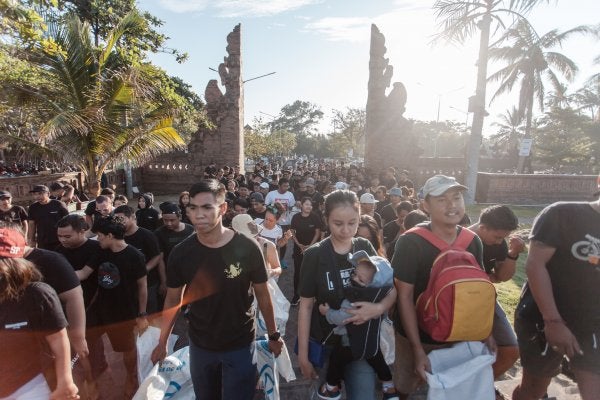 The world is rallying to protect planet earth and the people of Bali are doing their share. In an annual beach cleaning event organized by One Island One Voice, there were about 12,500 participants armed and ready to clean the beach. It was held on 15th February and they call it Bali’s Biggest Clean Up. This year was important because previously a ban on single-use plastics had been imposed and this was the first Beach Cleaning after that. The beach cleaners even got artistic and used the wastes to create rather artistic and decorative collages. The collages on the beach were made using lost sandals, PET bottles, spoons, and forks- all plastic refuse that would have ended up in the ocean soon. Also Read: This Bike Chair Allows You To Take Someone With Special Needs For A Ride

The Organisation, Making Oceans Plastic Free, had been engaged in surveying the number of wastes and categorizing them. This year they came forward again. According to their observation, while about 55 percent of the waste still originates from plastic sources, some individual results have been promising. Like plastic bags have gone down from 15 percent to 9 percent. Tons of waste are being generated every year by tourists as well as residents. So it was not surprising that people of all ages gathered to make this endeavor more fruitful. The number of people joining keeps going up every year and so do the number of places cleaned. Organizations, like Making Oceans Plastic Free, are coming forward and lending their support to this cause because they wish to stop the plastic from entering the oceans. The plastic on land and ocean is harming the creatures. And it does not dispose for years.

Bali’s initiative will not only bring the community together in an attempt to clean their surroundings but also be an awareness campaign. The coming generation needs to learn about their individual roles in saving the environment they live in. They need to learn to respect nature and treat it gently. Because Earth is the only home we have now.

The post Thousands Of People Took Part In Bali’s Biggest Beach Cleanup In A Single Day appeared first on TruthTheory.