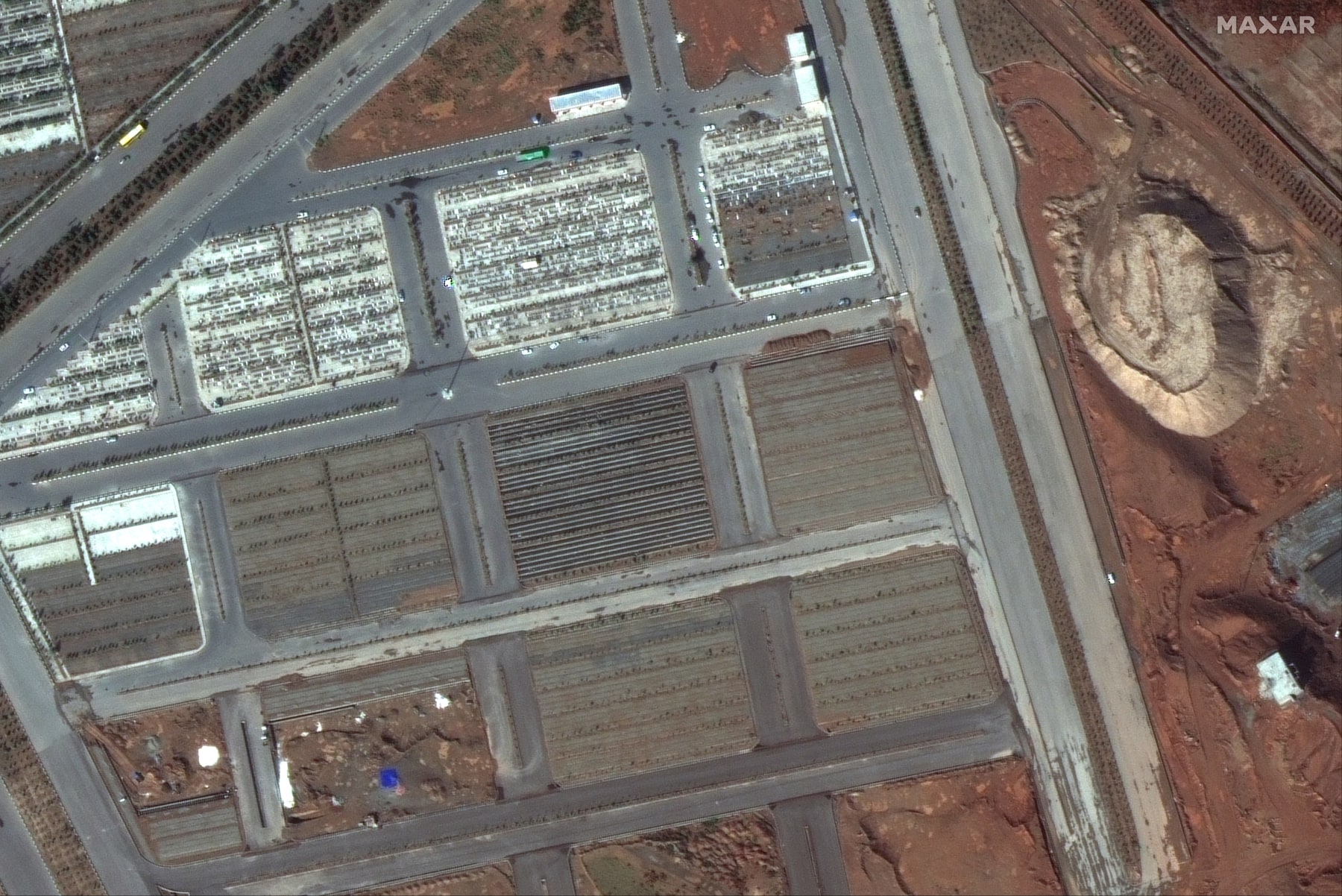 Iranian authorities began digging a pair of trenches for victims just days after the government disclosed the initial outbreak. Together, their lengths are that of a football field.

Two days after Iran declared its first cases of the novel coronavirus — in what would become one of the largest outbreaks of the illness outside of China — evidence of unusual activity appeared at a cemetery near where the infections emerged.

At the Behesht-e Masoumeh complex in Qom, about 80 miles south of Tehran, the excavation of a new section of the graveyard began as early as Feb. 21, satellite images show, and then rapidly expanded as the virus spread. By the end of the month, two large trenches — their lengths totaling 100 yards — were visible at the site from space.

According to expert analysis, video testimony and official statements, the graves were dug to accommodate the rising number of virus victims in Qom.

Qom is the spiritual center of Iran’s ruling Shiite Muslim clerics. With a population of about 1.2 million, the city is about 80 miles south of Tehran. Iran’s first two cases of coronavirus were in Qom.(COPERNICUS SENTINEL-2 SATELLITE IMAGE, FEBRUARY 27, 2020)

The Behesht-e Masoumeh complex near Qom includes the city’s largest cemetery, plus parks, a mosque and a morgue.(COPERNICUS SENTINEL-2 SATELLITE IMAGE, FEBRUARY 27, 2020)

In satellite imagery from October, a large section of the cemetery appears unused. The imagery was provided to The Washington Post by Maxar Technologies, a Colorado-based space technology company.(MAXAR TECHNOLOGIES)

In the weeks after the first confirmed coronavirus cases in Qom, Iranian authorities dug two large trenches, totaling 100 yards in length, in the previously unused area of the cemetery to accommodate the rising number of victims.(MAXAR TECHNOLOGIES)

Iran, a nation of about 80 million people, has suffered a particularly deadly surge of coronavirus infections, including among its top leadership. Iran’s Health Ministry says that 429 people have died of the virus, which causes the disease known as covid-19, and more than 10,000 have fallen ill. Among the dead are members of parliament, a former diplomat and even a senior adviser to the Supreme Leader. At least two dozen other officials, including a vice president, have been infected.

In Qom, the spiritual center of Iran’s ruling Shiite clerics, more than 846 people have contracted the virus, officials say. Iran’s government has not released an official death toll for Qom, however, where about 1.2 million people live. But videos, satellite images and other open-source data from the cemetery — a vast complex six miles north of the city center — suggest that the number of people struck down by the virus there is significantly higher than the official figure. 0:40

A senior imagery analyst at Maxar Technologies in Colorado said the size of the trenches and the speed with which they were excavated together mark a clear departure from past burial practices involving individual and family plots at the site. In addition to satellite imagery, videos posted on social media from the cemetery show the extended rows of graves at Behesht-e Masoumeh and say they are meant for coronavirus victims.

The imagery analyst, who requested anonymity because of the sensitivity of his work, also pointed to an image showing what appears to be a large white pile of lime, which can be used to manage decay and odor in mass graves. Iranian health officials have in recent weeks confirmed the use of lime when burying coronavirus victims.

High resolution satellite imagery from March 1 and March 8 shows increased activity inside the cemetery, with the grave site extended during the interim and more than a dozen vehicles near the area of the trenches in the second image. (Maxar Technologies)

In the following video, shared by the BBC’s Persian service March 3, the narrator describes the scene at Behesht-e Masoumeh cemetery as men carry a casket toward a trench with multiple graves. Qom, like other parts of Iran, is grappling with the coronavirus outbreak that has sickened thousands of people and overwhelmed the public health infrastructure.

“This is the section for coronavirus victims,” the narrator says, as the camera pans across a small portion of the trench, showing mounds of dirt and small, simple markers. People wearing blue protective suits are seen standing nearby. “More than 80 [people] have been buried in this section so far, and they say only 34 deaths,” he says, citing the official death toll on Feb. 28. 0:51

Fabian Hinz of the Middlebury Institute of International Studies, who reviewed the preceding video and the one that follows, said that unique geographical markers in the videos match landmarks found near the cemetery.

In the next video, another narrator says that he is at the Behesht-e Masoumeh cemetery on March 3, about two weeks after Iran reported its first cases. By that time, at least 77 people had died of the virus, according to official figures, and more than 2,000 people were infected, though information from Tehran hospitals reviewed by The Washington Post strongly suggests the outbreak is far larger.

“A worker told me that they must have buried more than 250 coronavirus victims so far,” the caption reads. As the narrator walks across the cemetery grounds, he points the camera down to highlight what he says are new burials. “These are all graves and they are fresh,” he says, at one point using a gloved index finger to direct the viewer to the plots on the horizon. “These are all from the last few days,” he continues. “And as you can see, it goes on until the end.” 0:48